I've heard that dogs can only see black and white. Is that true? 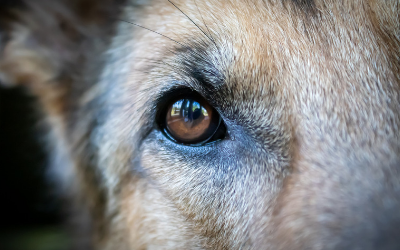 When you look at a rainbow in the sky, you see shades of red, orange, yellow, green, blue, indigo, and violet. Can your canine friend distinguish the same range of color that you do? Does he see bands of black and white? Do the colors look blurred?

How dogs see color is a long-standing topic of research and the results are pretty amazing. While dogs cannot appreciate all the colors that humans do, their world is not entirely black and white. In fact, dogs live in a pretty colorful world.

What makes a color so “colorful?"

Color is discerned by the nerve cells in the eye. The retina of the eye has two main types of cells—rods, which detect light levels and motion, and cones, which differentiate colors. Human eyes have three types of cones that can identify combinations of red, blue, and green. Dogs possess only two types of cones and can only discern blue and yellow - this limited color perception is called dichromatic vision.

Humans may have more cones, allowing us to see more colors and see them brighter than dogs do, but dogs have more rods, giving them the edge when it comes to seeing in low light or identifying moving objects.

What is color blindness?

When it comes to distinguishing color, a dog’s normal vision is most like a person who has red-green color blindness. Having said that, no further degrees of color blindness have been recorded in dogs.

How does a dog’s vision compare to human vision?

Just because dogs don’t appreciate the entire spectrum of color that humans do, that does not mean they are unable to perceive different colors. They just may not see the “true” color of an object.

For example, the color red appears dark brownish-gray or black to a dog. And yellow, orange, and green all look a bit yellowish to a dog. Our furry friends see blue really well, but purple looks the same as blue to them. When playing a game of fetch, dogs cannot tell the difference between a red ball and a yellow ball. Luckily, they have a great sense of smell so they can usually identify their ball and avoid mix-ups when playing a game of fetch in the park.

“In addition to color perception, canines and humans have other visual differences.”

In addition to color perception, canines and humans have other visual differences. In some respects, canine vision is not as acute as human vision. Dogs are more near-sighted than we are. When looking at an object from the same distance, the object may appear crisp to us, but blurred to our dogs. Our canine companions are also less sensitive to changes in brightness. Basically, dogs simply do not have the ability to perceive color in the rich, vibrant tones that we do.

What are other visual differences between dogs and people?

Canines have some visual advantages over humans. Dogs have eyes that are set more on the sides of the head which allows them a broader range of peripheral vision than we have. The trade off is a smaller range of visual acuity so dogs do not have the depth perception that we do.

Dogs have pupils that dilate maximally, allowing them to capture as much light as possible. They also have reflective cells under the retina, which form the tapetum. The tapetum gives dogs the “shiny eye” appearance and also improves their ability to see in dim light.

Dogs also have more rod cells in the retina than their human friends. Rods are responsible for detecting light and motion, even small movements at great distances. So, when compared to humans, dogs see better in dim light (dusk and dawn) and can more accurately detect motion.

Why do dogs see what they see?

Nature equips dogs with special visual accommodations that allow them to survive and thrive in the wild. Seeing well in dim light and picking up slight movements in the forest at great distances improve the dog’s hunting ability. These assets also help a dog know when HE is the prey and needs to flee.

Times have changed and most dogs are members of our human families now, so we provide them with nutritious food and protect them from predators. Even so, these visual abilities remain in the canine family.

© Copyright 2021 LifeLearn Inc. Used and/or modified with permission under license.

We will do our best to accommodate your busy schedule. Book your appointment today!

View our extended hours made for your convenience.

We strive to provide complete wellness care to our patients. Learn more about our services.